Fes to Volubilis & Meknes day trip: Explore the remarkably preserved Volubilis, once a major African outpost of the Roman Empire. Discover one of Morocco’s imperial cities, Meknes and its amazing ancient architecture of the Medina, Bab el-Mansour, beautifully patterned with the zellige tiling and stone carving work and lastly the dazzling Mausoleum of Moulay Ismail and Heri es-Souani

Meet your Private English-speaking driver at 8:30am in your Riad in Fes and then head towards Volubilis, Fascinating UNESCO World Heritage Sites, the once-bustling city and African administrative center of the Roman Empire. Moreover, this site also has remains of the Berber culture that took the city from Rome in AD 270

Afterwards, the excursion continues to the holy town of Moulay Idriss, Meknes is one of Morocco’s lesser-visited, known for its imperial past, with remnants including Bab Mansour, a huge gate with arches and mosaic tiling situated between Meknes’ Medina and the imperial city districts. Furthermore, it was built by Moulay Ismail,  and was conceived to be the ‘Versailles of Morocco’.

View the famed gate of Bab El Mansour, the dazzling Mausoleum of Moulay Ismail, beautifully decorated mausoleum was built to house the tomb of Sultan Moulay Ismail, who made Meknes his imperial capital in the 17th century. Later on, a rather long and dusty two-kilometer walk from Meknes’ Imperial City district brings you to the mammoth Heri es-Souani buildings, which once served as the Imperial City’s storage granaries and horse stables.

Enjoy lunch in one of the local traditional restaurants. Complete the tour by the Souani Basin is a manmade lake that once provided water to Sultan Moulay Ismail’s gardens and was part of the sultan’s impressive aqueduct system that brought water into the city.

At the end of the day, drive back to Fez, the oldest and largest medieval city in the world. Eventually, drop you off at your preferred location in Marrakech.

One day trip from Fes's Map : 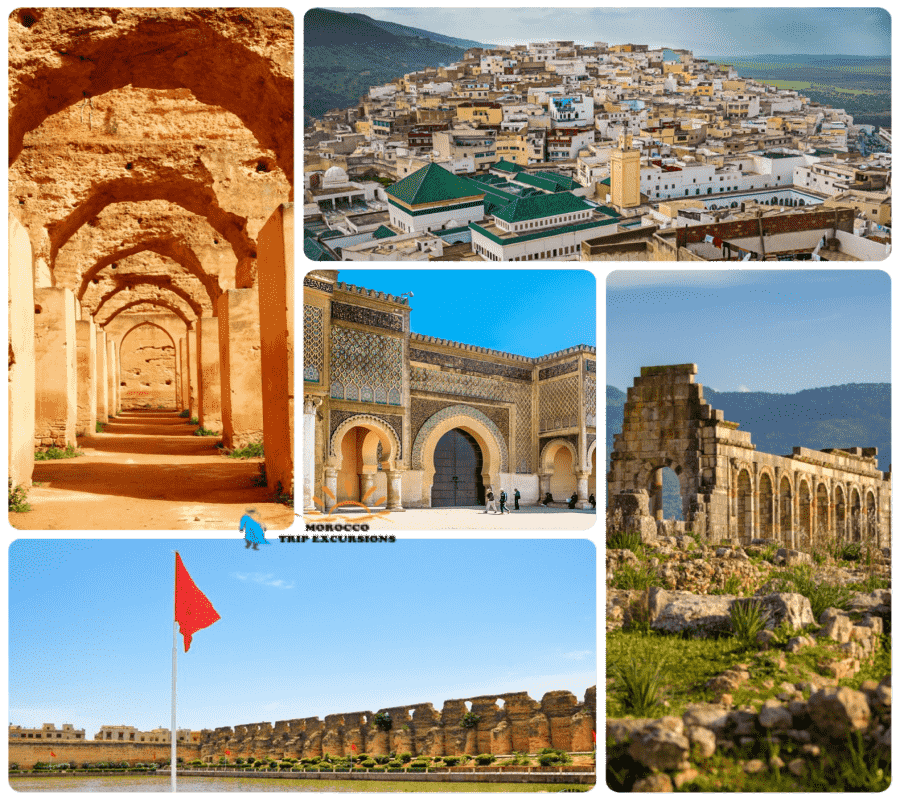 Private day trip from Fes to Meknes & Volubilis does not match what you’re looking for? So let us know by contacting one of our specialists. We do offer customized Marrakech day trips according to your duration of stay and either your preferences. Our Team at Morocco trip excursions is at your service to answer any questions and give you detailed quotes about tours, and also advice about the best time and places to see in our country. Whether you’re thinking about leading a tour or simply have questions stuck in your head. We’re happy to help.

What an amazing day trip from Fes to Volubilis and Meknes, It was such a wonderful experience, and it was also convenient as I took advantage of the short time I had in Fez. My tour guide Raja and the driver were absolutely incredible. Raja explained everything and was attentive at all times. Took me to a beautiful and yummy lunch spot to have a traditional Moroccan meal. I would definitely recommend this tour and the tour guide in charge of this experience. Would highly recommend this trip