These 12 days in morocco itinerary will take you to discover the most essential and famous Imperial Cities from Casablanca, Rabat, Tangier, Chefchaouen, Meknes, Fes to Marrakech and Essaouira – 12 days tour from Casablanca’s Scenic Drives: Touring Morocco is all about the senses. Take in the ever-changing scenery of the High and Middle Atlas Mountains, Sahara desert, Cedar forest, Ziz canyon and Tinghir gorge and also Dades Valley. Travel along the Road of a Thousand Kasbahs, as well as the African North-West Coast and more.

Upon arrival at Casablanca airport, meet your Private English-speaking driver and then drive up north to Rabat, Morocco’s charming capital. Check into your hotel.

After breakfast, embark on an orientation tour of the Capital, includes Udayas kasbah, the magnificent marble Mohammed V Mausoleum and Hassan tower, as well as the ancient necropolis site of Chellah. After enjoying lunch in a local restaurant overlooking the ocean, departure to Asilah, founded in Phoenician times, before arriving in the bustling port-city of Tangier. Check-into the hotel, overnight stay in Tangier.

This morning, take a half day city tour of Tangier. View Spartel Cape, and the Hercules Cave. From here, you will get an exceptional view of the Strait of Gibraltar and the Atlantic Ocean also. After lunch, we continue to Chefchaouen in the heart of the Rif Mountains, the entire road is unique for its green-tinted landscape and incredible scenery.

Enjoy the rest of the day at leisure. You may stroll through the Plaza Uta el-Hammam in the heart of the Medina, and its charming blue and white-washed buildings. Experience the bustle of city life. Perhaps try some local street food in the main square and climb one of Rif mountains to witness a wonderful sunset from a mountain top with excellent views of the surrounding landscape.

After breakfast, we will be heading towards Fes through Volubilis and Meknes. Fascinating UNESCO World Heritage Sites. Take a stroll in the remains of the Roman and Berber cultures that once occupied it. Thereafter, the journey continues to the holy town of Moulay Idriss, Meknes is one of Morocco’s lesser-visited. It was built by Moulay Ismail and was conceived to be the ‘Versailles of Morocco’. View the famed gate of Bab El Mansour, and the Jewish Quarter. After lunch at your convenience, set out towards fes, the oldest and largest medieval city in the world.

This morning, you’ll meet your local guide at the hotel and begin the city tour of Morocco’s spiritual capital, Fes. Start by visiting the bronze doors of the Royal Palace nearby the Hebrew district ‘Mellah’. Then head on to an amazing panoramic view of the Medina from one of the hills surrounding the city. Thereafter, walk into the Medina to visit Attarine and Bou Inania Madrasas and the center of Koranic studies. Explore the tanneries, Souks, Ess-Seffarine and El-Nejjarine squares and also potteries. Furthermore, learn the fascinating history of the city, which was founded in the 9th century.

On the other hand, it is home to the world’s oldest university, once the capital of the kingdom before 1912. After lunch at a local restaurant, you are free to either choose to go back to your hotel or wander through the endless alleyways of the world’s largest Medina. The remainder of the day is at leisure.

Departing early, we’ll leave Fes behind and head to Merzouga. Moreover, pass through Cedar forest full of Barbary Macaque monkeys, jagged rock faces, and tiny Berber villages as you cross the middle atlas mountains and begin to descend towards the Sahara desert. Along the way, view glimpse of Morocco’s nomadic tribes, travelling across the mountains and also often staying in make shift tents as they head to their next destination.

After lunch in Midelt, hit the road again for the Majestic Merzouga desert. Stop by Ziz valley for a magnificent panoramic view. On arrival in Erfoud, famous for its fossil and marble products. Then continue to Merzouga for an overnight stay in a hotel near the Erg chebbi dunes.

After breakfast, take a tour around the Erg chebbi dunes by 4-wheel drive vehicle through the gorgeous landscapes on the edge of the Sahara desert dunes. Afterwards, stop at Khamlia village, enjoy some Gnawa music. Next, share a cup of tea with a nomadic Berber family in their tents. Thereafter, head back to Merzouga center. Enjoy a Berber pizza for lunch in a traditional local restaurant. In the late afternoon, set off by camel for an incredible hour trek into the Sahara desert to witness a wonderful sunset and spend the night at a Berber camp. Dinner around campfire with Berber’s musical entertainment.

Enjoy an early morning sunrise over a high dune of Erg chebbi. After freshening up and breakfast, ride camels back to Merzouga village. Then head off to Todgha Gorge in Tinghir. One of Morocco’s popular natural sights, the charm of Todra lies in its changing colors as the sun slowly moves from east to west over the towering vertical limestone cliffs that reach heights of 987ft. Furthermore, it’s carved deep into the High Atlas Mountains.

Plenty of time to wander through this sumptuous site, and then continue south-west to the city of Boumalne Dades. En route, stop by a Place known as Monkey fingers for taking some pictures. Next, a wonderful panoramic view of Dades Valley and the Mountains beyond. Once arrived, check-in and free time to relax. Dinner and overnight at your hotel.

On the Ninth day of 12 days morocco tour from Casablanca; After breakfast, we’ll set out in the morning to one of the jewels of morocco, Ait ben haddou kasbah via the Rose’s valley in Kelaat M’gouna and the Skoura palm groves. Then push along to Ouarzazate along the Road of 1000 Kasbahs. In addition to that, it’s famed for being a prime filming location for many Hollywood TV shows and Blockbusters, there’s an opportunity to view the World’s largest film studio.

Upon arrival at the kasbah, in actuality, this setting has been used for more films than any other location in Morocco: Lawrence of Arabia, Babel, gladiator and much more. After lunch and a visit to this famous kasbah, hit the road for Marrakech across the high atlas mountains. Check-into the hotel, overnight stay in Marrakech.

After breakfast, meet your local expert in the hotel. Explore the delights of Marrakech on a half day tour. Begin with the intricately decorated Bahia palace, intended to be the greatest palace of its time, when it was built in the late 19th century. Next stop, the Saadian Tombs, a historic royal necropolis. Thereafter, take a walk back to view the Grand Mosque of Koutoubia, with its minaret dominating the Marrakech skyline. Last but not least, visit the beautiful Garden of Majorelle, which was designed by the French Artist Jacques Majorelle in the 1920s. Lastly, the Yves Saint Laurent Museum nearby is also well worth a visit.

After exploring, drive towards Essaouira on Morocco’s Atlantic Coast. En route, stop by goats climbing the Argan trees for taking some photos. After that, continue the journey to an Argan oil Berber women’s Cooperative nearby (Optional). Take a moment to view traditional methods of extracting nutritive oil from this nut, reputedly rich in nutrients and also antioxidants beneficial to cosmetic and culinary.

Once get to Essaouira, enjoy the balance of the day at leisure. Why not head to the beachfront lined with a wide variety of cafés for sipping on a cup of coffee or Mint tea while witnessing the sunset or consider a visit to Medina and its bustling fish market, winding endless streets and alleyways lined with white-wash houses, as well as the tiny admirable spice and jewelry stores. Last but not least, don’t miss out a visit to Harbor’s port and its bright-colored fishing boats, an old Portuguese fortification built along the cliffs that defended the city from sea attacks.

Departing the city this morning, we head back to Morocco’s economic city. Upon arrival in Casablanca after a long drive from coastal Essaouira, visit Hassan II Grand Mosque, considered among the largest in the world. Besides, the mosque’s minaret is the tallest religious structure in the world. Enjoy the rest of the afternoon and evening at leisure, you’re free to continue exploring, try your hand at haggling in Mohammed V square, or why not relax and enjoy the immaculate facilities of your hotel?

Our amazing 12 days in morocco tour itinerary from Casablanca ends today after hotel check out. Transfer to the airport for your departure flight. 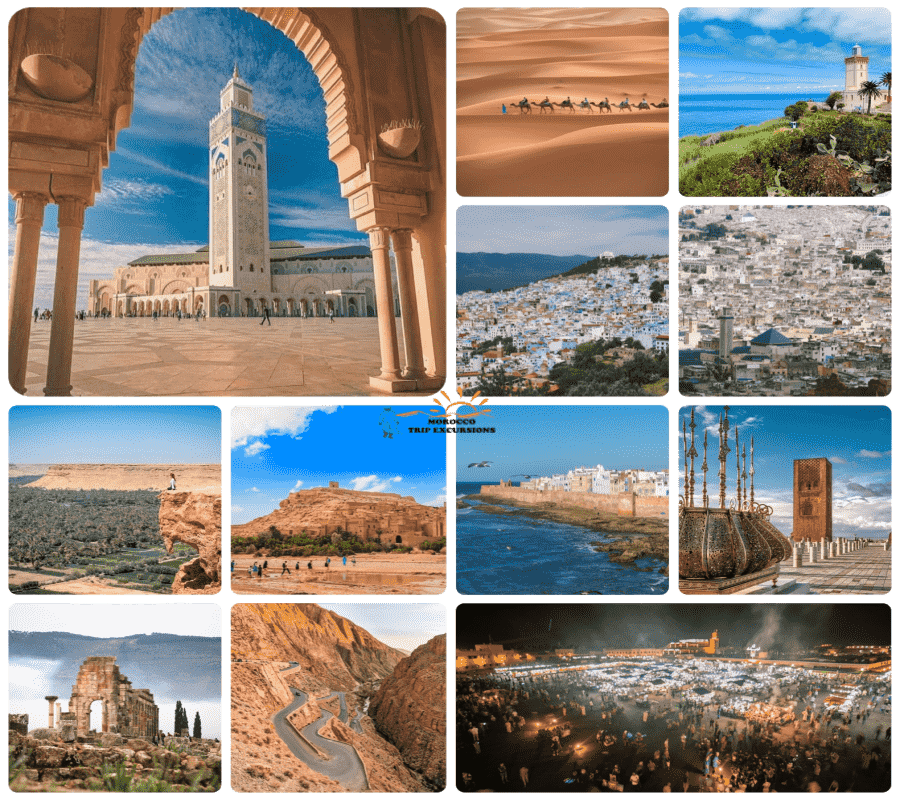 These 12 Days in Morocco tour itinerary from Casablanca does not match what you’re looking for? So let us know by contacting one of our specialists. We do offer customized Morocco tours according to your duration of stay and either your preferences. Our Team at Morocco trip excursions is at your service to answer any questions and give you detailed quotes about tours, and also advice about the best time and places to see in our country. Whether you’re thinking about leading a tour or simply have questions stuck in your head. We’re happy to help.

We loved this. I never would have been able to see and do all the great things if we planned this on our own. The accommodation and selected restaurants were great choices with delicious food. The driver/guide (Moham) was awesome, made sure we knew exactly where to be when. I highly recommend if you want to see a lot in such a 12-day tour.

Open chat
Text us on WhatsApp for a quick reply