Day trip from Marrakech to Ait benhaddou & Ouarzazate: Discover the ksar of Ait Benhaddou in the foothills of the Atlas Mountains, a fortified village, and a great example of the Moroccan earthen clay architecture, as well as a UNESCO World Heritage Site since 1987. Tour Ouarzazate city – the capital of film and the gateway to the majestic Sahara desert.

Meet your Private English-speaking driver at 8am in your accommodation and then depart Marrakech on a journey through an impressive landscape in the heart of the high atlas mountains range, towards one of the jewels of morocco, Ait ben haddou kasbah. Marvel at the scenic drive of Tizi N’tichka Pass, 2260 m altitude.

Aït Ben Haddou is an 11th century ksar (fortified village) province that strikes with its historic architecture. Its unparalleled style has been an inspiration for many film directors, choosing Ait Benhaddou as a shooting location for well-known movies and series such as Lawrence of Arabia, Gladiator, Babel and Game of Thrones.

Upon arrival, take a stroll through the walls of Ait Ben Haddou with many narrow streets and half a dozen kasbahs (fortified houses).

Thereafter, drive to Ouarzazate – Capital of film, located in the south of the High Atlas Mountains. It’s famed for being a prime filming location for many Hollywood TV shows and Blockbusters, and the gateway to the majestic Sahara Desert. Moreover, it’s home to Taourirt Kasbah, which houses a 19th-century palace, and offers you great views of the rugged local landscape. There’s also an opportunity to view the World’s largest film studio.

After a visit of Ouarzazate, head back to Marrakech via Telouet, stopping en route for lunch in a local restaurant. Eventually, drop off at your preferred location in Marrakech. 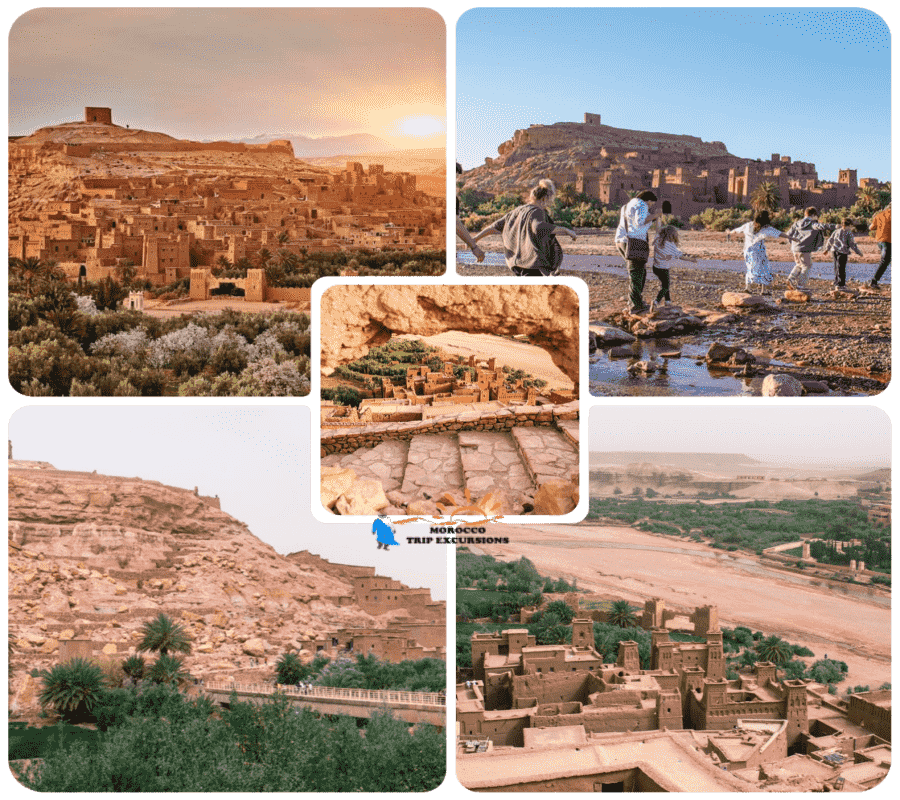 1-day trip from Marrakech to Ait benhaddou & Ouarzazate does not match what you’re looking for? So let us know by contacting one of our specialists. We do offer customized Marrakech day trips according to your duration of stay and either your preferences. Our Team at Morocco trip excursions is at your service to answer any questions and give you detailed quotes about tours, and also advice about the best time and places to see in our country. Whether you’re thinking about leading a tour or simply have questions stuck in your head. We’re happy to help.

Our day Excursion from Marrakech to Ait benhaddou showed us a little of real Morocco. The trip is long with magical scenes, it’s well worth it, the whole experience is amazing! Thank you Omar, for your care, we felt really safe on board. With the local guide in the Kasbah and we were also satisfied. I would only suggest allowing a little more time in the village, restaurant in Ouarzazate was nice, however the food was very tasty with cheap price. We have visited the studios and the beautiful Kasbah
of taourirt. All in all, the trip was well organized, and I would recommend for all travelers.