Best 6 days tour in morocco from Marrakech to Casablanca through the majestic Sahara desert of Merzouga, Fes, Chefchaouen and Rabat. Uncover all the rich cultural heritage and highlights of south up to north Morocco. Tour the ancient fortified village of Ait Ben Haddou in the foothills of the Atlas Mountains. Experience a thrilling adventure into Morocco’s Middle & High Atlas Mountains. Travel along the Road of a Thousand Kasbahs, Lush valleys, stunning canyons of Todra & Dades. Enjoy Camel trekking in the Erg chebbi dunes and overnight stay in a charming Berber Camp in the heart of the desert under an endless canopy of Moroccan Saharan stars. Visit the remarkable Ziz valley and Cedar forest, as well as the Moroccan ski resort, ifrane. Wander around the charming blue city nestled in the Rif Mountains and lastly get lost in the world’s oldest city’s maze-like Medina of Fes.

Meet your Private English-speaking driver at your hotel and then depart Marrakech on a journey through the famous Tichka Pass to Ouarzazate. Marvel at the scenic drive of High Atlas, 2260 m altitude. Upon Arrival at Ait ben haddou, take time to visit this famous UNESCO World Heritage Site. A ksar – or fortified city – along a former caravan route. Furthermore, it’s dotted with crenelated towers, is considered one of the most beautiful in the country and has often been a filming location for many series: for ex: Lawrence of Arabia, Jesus of Nazareth, The Gladiator and many more. Other than that, this fortified city’s high-angled towers stand out above the family dwellings.

After lunch and at your convenience, then hit the road for Ouarzazate city, famed also for being a prime filming location for many Hollywood TV shows and Blockbusters including James Bond, The Mummy and more recently Game of Thrones. The remainder of the day is at leisure upon arrival.

This morning, set out towards the Majestic Merzouga desert through the perfumed rose’s valley of Kaalet M’gouna and Boumalne Dades. En route, stop at the captivating Gorge of Todra. You might like to take a stroll in the towering Todra canyons that reach heights of 987ft, a deep ravine carved by the Todgha River over millennia. You’ve the opportunity to browse for Moroccan rugs in a carpet store here.

Afterwards, travel along the Road of a Thousand Kasbahs and begin to descend towards the Sahara Desert. Stopping for lunch in the village of Tinjdad. Along the route there’s Khettarat, ancient wells dug by the nomads to find water, now dry. As approaching the destination, pass through Erfoud, the gateway to majestic Moroccan Sahara. It is well known among archeologist due to fossils dating back to hundreds of years. Upon arrival at Merzouga, you’ll then take a camel trek for an hour across the rolling sand dunes of Erg chebbi. Enjoy a mesmerizing sunset over the dunes and spend the night in a Berber Camp in the heart of the desert under an endless canopy of Saharan stars.

Wake up to enjoy an early morning sunrise just over a high dune of Erg chebbi near your Tent. After freshening up and breakfast, then hi the road for fes. Today’s journey is long however quite scenic drive, heading up north into the remarkable Ziz Gorge, vast valleys and Middle. Once arrive at Midelt famed for its apple cultivation, Free time to enjoy your lunch in a local restaurant. Afterwards, continue along a beautiful route of Berber hamlets towards Cedar forest (full of Barbary Macaque monkeys) and jagged rock faces as you cross the middle atlas mountains and begin to descend towards Fes. On arrival, check-in and free time to relax. Overnight at your hotel in Fes.

After a leisurely breakfast, embark on a half day city tour of Fes. View the bronze doors of the Royal Palace nearby the Hebrew district ‘Mellah’. Then head on to an amazing panoramic view of the Medina from one of the hills surrounding the city and lastly the tanneries if you like to. Thereafter, we set off towards Chefchaouen nestled in the heart of the Rif Mountains.

From here, the remainder of the day is at leisure. Feel free to wander around the Plaza Uta el-Hammam in the heart of the Medina, and its charming blue and white-washed buildings and also the main busy square, an opportunity to try some local street food. Perhaps climb one of the Rif mountains to witness an incredible sunset from a mountain top with majestic views of the surrounding landscape. After that, return to your hotel for the evening.

After some free time to relax or continue exploring the city this morning, we make our way to Casablanca. On route, you’ll stop at Rabat, the capital city and residence of the King. Enjoy a visit to this Imperial city of Rabat, including Hassan tower and the Royal Tomb, as well as the ancient necropolis site of Chellah and Udayas kasbah.

After lunch and some free time to enjoy the charming coastal city, we head to the economic capital of Morocco. Once arrived in Casablanca, take a tour of the Hassan II Mosque, one of the most elaborately designed mosques in North Africa. Later, check into your hotel.

Our amazing Morocco tour ends today after hotel check out. Transfer to airport for your departure flight.

South up to North Morocco in 6 days from Marrakech's Map : 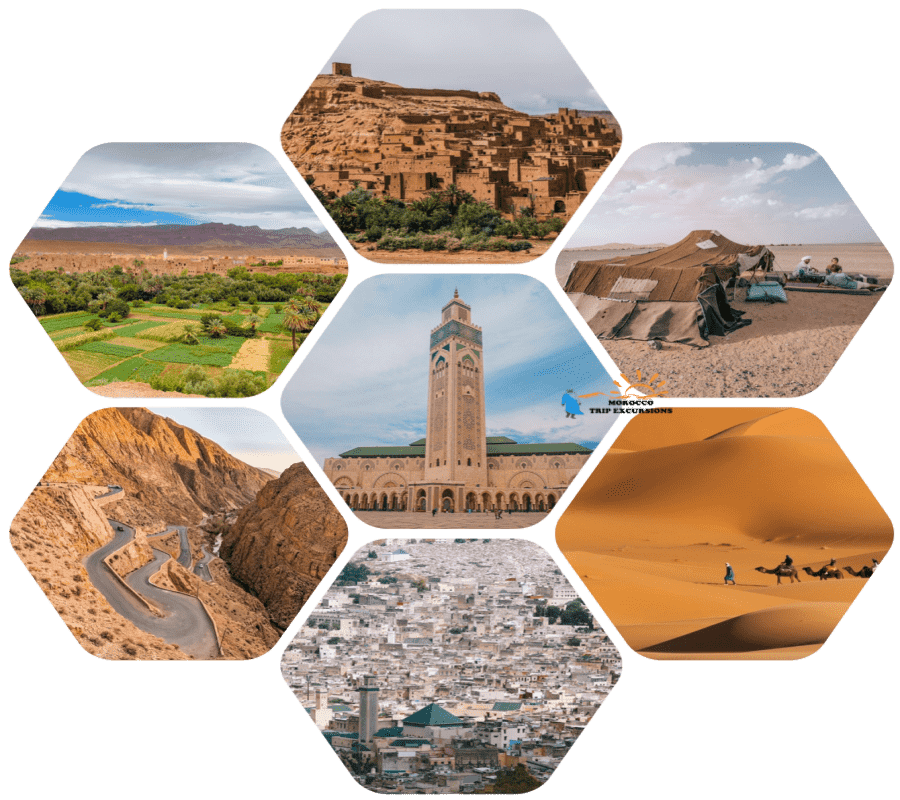 These 6 Days in Morocco desert tour from Marrakech does not match what you’re looking for? So let us know by contacting one of our specialists. We do offer customized Morocco tours according to your duration of stay and either your preferences. Our Team at Morocco trip excursions is at your service to answer any questions and give you detailed quotes about tours, and also advice about the best time and places to see in our country. Whether you’re thinking about leading a tour or simply have questions stuck in your head. We’re happy to help.

How long is the Camel ride in Erg chebbi dunes?

The camel trek is about an hour with a break in the heart of the desert in order to witness the sunset. If you prefer to walk then you can walk alongside our camel caravan but bear in mind that walking in the sand can be tiring.

Do I need to bring a sleeping bag?

You don’t need a sleeping bag since there’re well-equipped Desert camps provides all the bedding you need including pillows, blankets and even a private bathroom in the tent if you need to take a shower (Luxury camp).

Your booking with us should be made as far in advance as possible. The earlier you book, the more likely we are to be able to secure the accommodation and means of transport that best suit you. Besides, you will need to pay a deposit to get your booking confirmed with us. This deposit is indeed a part of your total payment.

Moreover, we accept deposit payment by PayPal, Western Union. For other payment methods, please contact us. The Balance payment can be made in Cash upon arrival, avoiding many fees and hold security risks.

Read More about our Booking conditions

My boyfriend and I just did 6 day/ 5 nights morocco tour from Marrakech, and we highly recommend this company! We had a great driver, Ibrahim, who was very friendly and knowledgeable. He made our trip so much fun and has such an energetic personality! We also enjoyed our camel ride, beautiful sunset & sunrise, and a guided tour of FES. As well as plenty of time to wander the beautiful blue city and Rabat Medina. They made our one night in Sahara lots of fun! HIGHLY RECOMMEND this tour